In the heart of Paris, on the Ile de la Cité island, lies the Holy Chapel of Eglise Sainte Chapelle, a medieval Gothic chapel. The church was built sometime after 1239, commissioned by King Louis IX of France to house his Passion relics, among which included Christ’s Crown of Thorns. Sainte Chapelle remains one of the few surviving buildings of the Capetian royal palace.
It is worth visiting to view one of the most extensive and stunning collections of 13th century stained glass in the world. 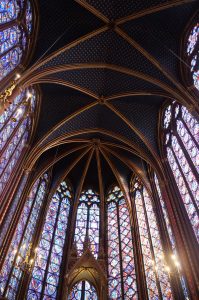 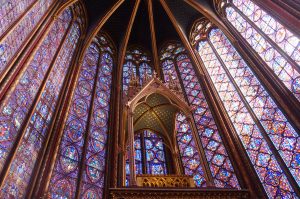 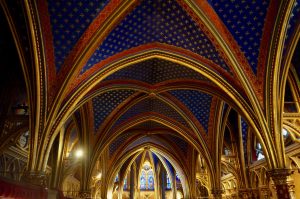 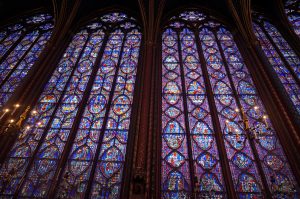 The chapel is actually situated inside the Paris courthouse ’court. The lower chapel, on the entrance floor, originally served as a parish church for the palace inhabitants. Meanwhile, the royal chapel on the 2nd floor houses the magnificent stained glass and is decorated in the « Rayonnant » Gothic architecture style (distinguished by its sense of weightlessness and strong vertical planes).
Note : King Louis IX was later canonized a saint by the Catholic Church, as Saint Louis.

Sainte Chapelle is a few step away from La Conciergerie, a castle like prison in front of the river Seine where Marie-Antoinette was kept before dying at the scaffold. You can actually visit the former prison which is now a museum.

Notre Dame is one of the oldest and most imposing cathedrals in France, its construction started in the 12th century and was finally finished 300 years later. It was built under Gothic architecture style with Renaissance and Naturalism influences at that time. These varying styles add to the outstanding yet quirky beauty of the building.
During the French Revolution, the Cathedral of Notre Dame suffered lots of damage , but it was restored by a talented engineer and kept its fame. Its symmetry, powerful beauty, this must-see of Paris has witnessed a lot of important ceremenies for Christianity and the history of nations. Because of that, people from all over the world, no matter what beliefs they have, come to visit it and are stunned by its grace.
The story of the Hunchback of Notre Dame, written by Victor Hugo in 1831 was a major literary success. The author was attracted by gothic architecture and he wanted to draw attention on its terrible state of despair. As the result, the king ordered a restoration in 1844.
More recently, Notre Dame went through a devastating fire in front of the world. One cannot remain indifferent about so much history gone into ashes. Less than 24 hours after the drama, French billionaires , luxury companies (LVMH and Kering), a major French oil & gaz company, and people around the world offered over 400 millions dollars donations to rebuild the cathedral. As per Président Macron’s objectives, the roof of the cathedral should be repaired in 5 years’ time.

I was lucky to climb up to the Notre Dames’s towers a year before the fire, I am sharing here pictures of the spire and rooftop as it looked like originally. 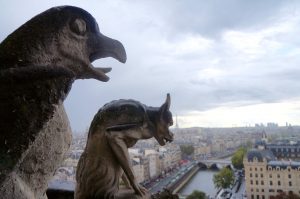 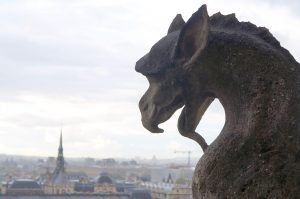 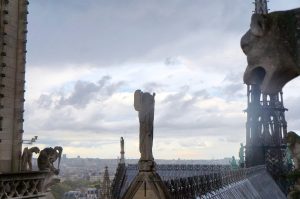 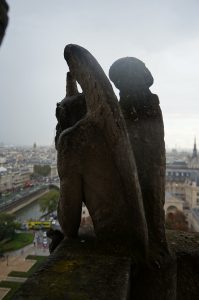